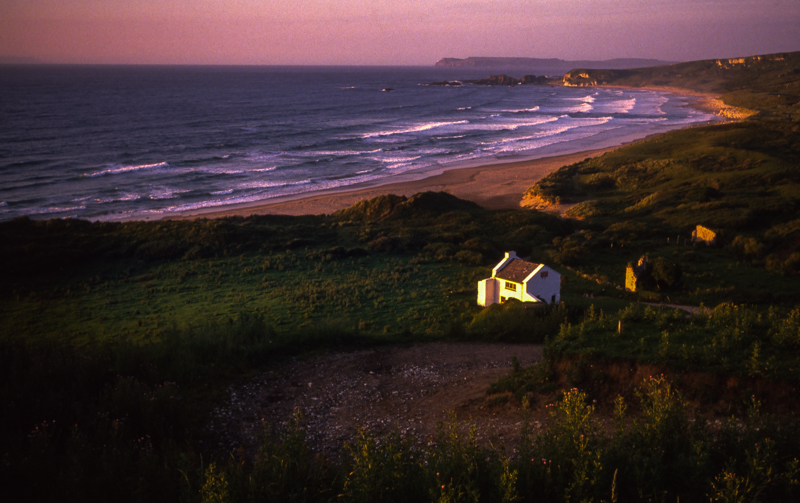 The little bit of lemon in the tea is wonderful, but something about citric acid causes Stanley’s tongue to become clumsy. It makes him sound Duchy when he speaks. Not in a God-awful way, and no more difficult to understand than Mr. FitzDermot’s heavy Irish brogue as they sit and converse in the tiny living room of the old house.

The FitzDermot Bed and Breakfast is much larger than it looks from the street, and on most nights it is near capacity–the tenants being Mr. FitzDermot’s twelve children, ten of whom are old enough to be out on their own. The tea bread, sweet with currants and speckled with tiny pieces of crunchy toasted walnuts, cures Stanley’s speech impediment, the salted butter slathered over it acting as a lubricant for his tongue.

Stanley sleeps away his first two days in Ireland. He doesn’t know if it is jet lag or if he is afraid, but he has knots in his stomach. He’s very much an introvert when it comes to strangers and it didn’t once cross his mind when he impulsively bought a one-way ticket to Shannon, that he might have to talk to people. But very quickly he found he didn’t have to–the Irish would do all the talking and all he had to do was listen.

Stanley sits across from Mr. FitzDermot, who is still talking, and rocks slowly in an upholstered swivel chair, a chair he is sure is his grandmother’s, although he has no idea how it got to Ireland from Ohio, and he listens as Mr. FitzDermot tells him all the reasons he needs to leave, to get on the road, and start his adventure. In fact, FitzDermot does a better job of kicking Stanley out of the nest, gently and with kindness, than he’ll ever do with his own children.

FitzDermot gives him until the rain stops to get out to the road, stick out his thumb, and start on his adventure. The next day, as if FitzDermot can bend nature to his will, it stops raining and doesn’t rain for the next three months, at least not anywhere Stanley is.

So, Stanley packs his things which isn’t much, a few sets of clothes and a lot of camera gear.  He sets one camera aside and jams the rest of the equipment into the bottom, he rolls his clothes and shoves them in, and then he tethers his sleeping bag to the top. When he reaches the edge of town, he finally gets up the gumption to turn backwards and walk with his thumb out.

A car passes. A second car, an old red Fiat, stops. The driver tells Stanley to throw his stuff in the back seat and jump in, and Stanley does. Then Stanley meets Stanley, a government sheep inspector out on his rounds for the day.

When Stanley asks Stanley where he’s going, Stanley doesn’t know. So Stanley decides Stanley needs to see the Cliffs of Moher.  Stanley asks if this is Stanley’s destination, too. It is not. But Stanley will drive Stanley along curvy country roads for an hour, have tea and a chat at the Cliffs with a bus driver he meets at the gift shop, then drive another thirty minutes back to his first farm inspection.

At the cliffs Stanley isn’t gone long and had he known the shear height of the cliffs he would never have left the visitor center.  Not only that but as he walks toward the precipice he feels silly.  It is the same feeling he had when his dad one summer takes him as a tag along on a two week business trip.  He has nothing to do while his father works at an unfamiliar and strange office but sit in a strange and unfamiliar hotel room.  That isn’t so bad, he sits and watches TV and orders room service but the day a secretary picks him up in the hotel round about and drives him to an amusement park, drops him at the gate and drives off is horrible.  A 13-year-old by himself at an amusement park, a boy with self esteem issues who feels like everyone is starring at him, no one to share a seat with on the rides, Stanley feels like a looser with no friends.

What Stanley soon realizes about the cliffs is how easy it would be to keep walking once he gets to the edge.  Not because he is distraught and wants to do himself in but because when he looks left he sees lush, very short, green grass that stretches onward to the horizon.  Just grass with an occasional splotch of wildflowers acting as punctuation.  When he turns right he sees the ocean.  It is the definition of navy blue.  The kind of ocean where the floor is lined with black rocks which sucks in all the light creating the illusion the water is nearly black.  From Stanley’s vantage point, where cliffs meet ocean, it is just like an horizonless pool.

Stanley is wrong though.  When he gets to the edge he stops still.  He tries to confront the eight hundred foot drop off but his stomach comes to his throat and in a panic he falls backward, crab walks like he is trying to get away from a poisonous snake and he doesn’t stop until he is a safe distance from the edge where an elderly Irishman helps him to his feet.  Stanley quickly heads back to the gift shop, catches up with Kyle and Stanley at their table and orders a cup of tea.

Stanley is simply amazed at the generosity of the Irish. The bus driver, Kyle, offers to take Stanley further, so Stanley climbs aboard a tourist bus full of senior citizens from Thousand Oaks, California. He rides standing, holding onto a metal bar in the front stairwell, talking to Kyle while he drives. Kyle will pick him up from the side of the road no less than five more times, all by coincidence, before Stanley crosses into Northern Ireland. Different rides will offer Stanley couches to sleep on, Sunday dinners, tea, and even a sister.

In between interesting drivers, Stanley meets interesting travelers, too. He meets two German brothers traveling the world collecting butterflies for their wealthy father while he stays in Germany and works; on the Aran Islands, they are looking for the Pearl-Bordered Fritillary. Having lunch at a hostel, he meets a Belgian monk and brewmaster who loves to talk beer and ancient brewing methods. And he will always remember Sophia, the drop-dead gorgeous little Italian girl who is always eager for sex, and, much to his delight, likes to do it with him everywhere.

In Ireland, Stanley feels free to be himself.  A certain lightness comes over him. He wakes up happy, only smokes occasionally, and doesn’t drink every day. It’s the Irish, it’s Ireland, it’s not being beholden to anyone that brings forth the qualities he likes best in himself. He feels the burden of having to be someone lifted from his shoulders like a heavy backpack.

Not even when he crosses into Northern Ireland to start work on his self assigned photo project about the Irish Republican Army does this feeling change. It only gets stronger as the beauty of the Northern countryside fills him with joy, and he puts off going to Londonderry to start his story.

Outside the city of Portsmouth, near White Park Bay and its beautiful beach, where early each morning a herd of cows comes down to munch on seaweed, Stanley is walking and taking photos from the road high above when he hears a giggle on the other side of the stone wall. He sees no one. Then he hears the giggle again.

Before he began this journey, Stanley would have put his head down and kept walking to avoid whoever was on the other side of that wall. Now, however, he is emboldened and he reaches across the top of the wall, pulls himself up, rests his chin on his hands, and looks down. He smiles. Lying directly below him on their sleeping bags are Beth and Deirdre .

Stanley introduces himself. He likes Beth and they become fast friends, but in Riley he sees it immediately.  She is as beautiful as the Irish countryside at dawn, but it’s not her beauty that gets him. Instantly, Stanley knows that all other women for the rest of his life will be judged against this girl, this vision, before his eyes.

Beth and Riley are Australian. To Stanley it seems like the Australians are invading; every third traveler he’s met has been either an Australian or a New Zealander, as if they’re having a summer conclave on the Emerald Isle. Stanley tells the girls about the beautiful view from the hostel at White Park Bay, so they roll up their sleeping bags, get their packs together, and the three of them walk the short distance to the hostel, talking all the way.

By the next day of his new found friendship he wakes with the same fear he feels at edge of the Cliffs of Moher .  To confront his fear Stanley gets up,  walks outside and rolls a cigarette.  He sits on a rock and listens to the gentleness of the waves and stares out across the cold water of the Irish Sea and smokes his one and only cigarette of the day.

He doesn’t dare leave his morning perch until the smell of the tobacco and the salt water air calm him.   When he is finished, when his nerves have untangled, he goes inside to the communal kitchen, putters around and eventually makes a cup of tea.  He is stalling.  He is deathly afraid he will look like a lost puppy who is given a little milk at the back porch door.  He is anxious to make his and Riley’s crossing paths this morning feel coincidental. Stanley is falling.  He lies to himself and tries to convince himself he hasn’t started the descent but he knows the out of body feeling of head over heels and right now he is upside down.

For Stanley the next six days are eternal. They don’t last forever, unfortunately, but Stanley will remember them forever. He now knows what it’s like to be weak in the knees, to feel his heart in his throat every time he talks, and to be filled with giddiness each night and find it impossible to sleep because he’s already dreaming.

Stanley scratches his head, realizes two people in the throws of the beautiful Irish countryside, spending every waking second together with the leisure of having nothing else to do is in no way reality, but Stanley has never been realistic.

The relationship is never consummated physically. The one time he holds Riley’s hand, he has to fight back tears. It’s so passionate: the feeling of her hand, the soft flesh just above her palm, the way her fingers fit between his, the cushion of air between her palm and his. Other than on the cheek when they finally say goodbye, Stanley never even so much as kisses Riley. He’s too scared to try. Not because she might reject him, but because she might accept.

One thought on “An Affair”