I like the unexpected.  Especially when it is something new to me, or it tastes and sounds exotic but in reality it has a longstanding history—a marriage of flavors that is natural. Flavors tried and tested over time, in this case,  in towns all across Portugal.

Octopus is a food that falls into a category that not to many foods do—it is either flash cooked very quickly or it is stewed for a very long time. Both methods intended to render the octopus meltingly tender.  I have tried flash cooking octopus several times and either I am an idiot and just can’t get it right or my definition of tender is radically different from everyone else who uses the flash cooked method. 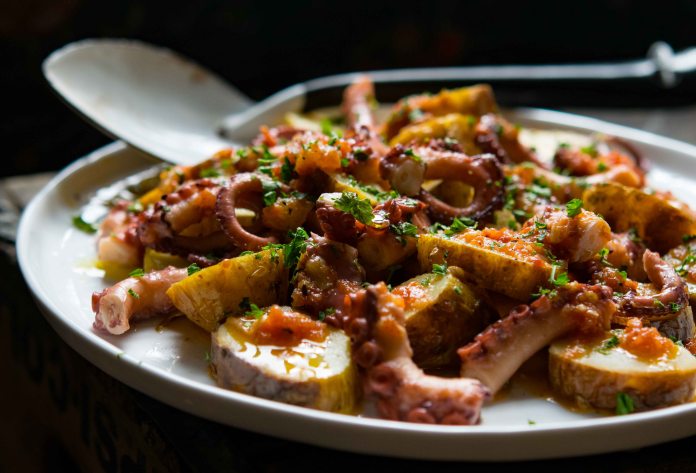 For me, I used slow cook them.  It takes about an hour for a 2 pound octopus, give or take 15 minutes.  There is nothing at all wrong with this method.  It takes time but it renders a perfectly tender octopus but ever since I wrote my pressure cooking book, An Idiot’s Guide to Pressure Cooking I invariably started cooking lots of things under pressure, octopus being one of the many.  The pressure cooker turns out the most tender octopus in a lightning fast 10 minutes.  You can also cook the potatoes just as quick and quicker depending on their size.  I have thought about combining the two and cooking them both at once but I am not convinced I want my potatoes to taste like octopus.  I want to keep the flavors separate, let the potatoes have an equal roll.

The tomato vinaigrette is bold with roasted garlic and sweet with sun dried tomatoes.  The acidity brings out the best in the octopus and the potatoes.  Once the garlic is roasted it comes together easily in the food processor.

Note: if you are using traditional cooking methods place the octopus in a large pot with the bay leaf and lemon.  Add water to cover, bring to a boil and reduce the heat to a simmer.  Cook the octopus 2 hours or until tender.

Octopus and Potato Salad with a Tomato Vinaigrette

One thought on “Octopus and Potato Salad with a Tomato Vinaigrette”