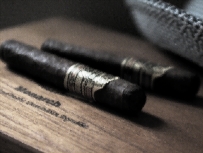 Recently, for what seems like the millionth time, I sat down and watched the original The Hustler. Not because of the story, although it’s a great story; or Paul Newman’s blazing good looks, although his blue eyes are piercing, even in black and white.

No, this time I was watching the Great One: Jackie Gleason. He completely captivated my attention. He’s not in many scenes, but he steals the ones he’s in, hands down. You can almost see Newman studying him right there on-screen, as though his blue eyes are fixed, mesmerized, on the great acting Gleason is doing.

Their first scene together might be one of the best in any movie. Gleason comes up the stairs, enters the pool hall through a set of double doors, and there he is: the presence, the clothes (who else could wear that hat?), the je ne sais quoi. Newman’s eyes might pierce, but watch the banter between the two and notice the moments when Gleason smiles and his eyes are nothing less than sparkling. That sparkle in Gleason’s eyes has fascinated me for months. I’ve gone back and watched old footage of him on talk shows and other clips of him talking with folks. I thought “je ne sais quoi” was about the best way to describe the sparkle, but then I realized it was much more. END_OF_DOCUMENT_TOKEN_TO_BE_REPLACED