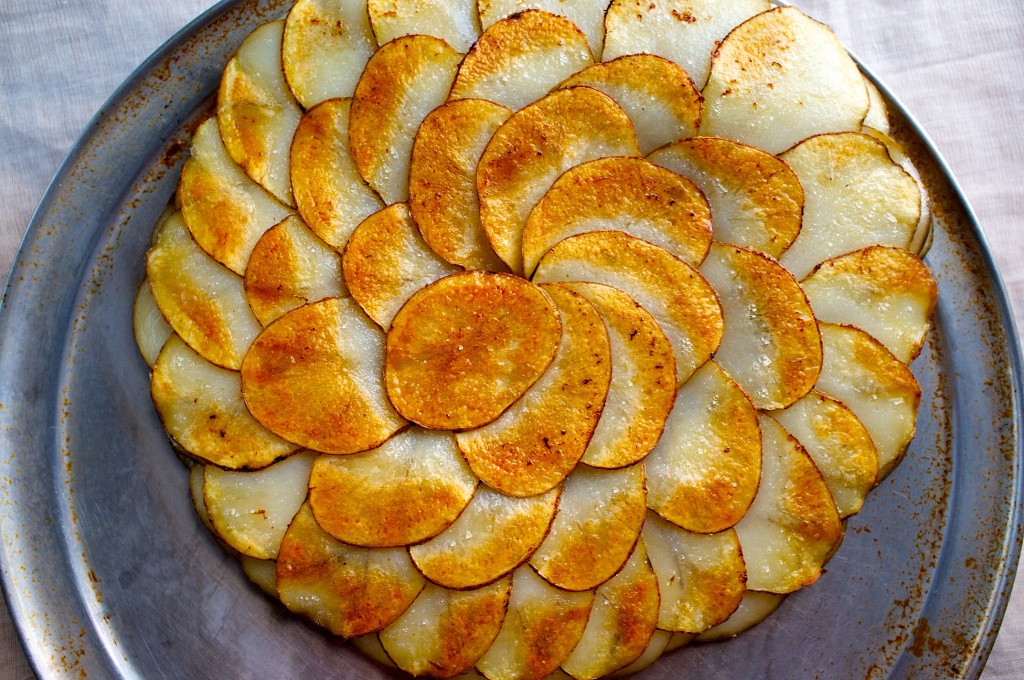 What thrills me the most about potato cakes like this is the crispy top and creamy interior.  If you use good potatoes the flavor is unbeatable and if you are creative you can even layer the interior with things like roasted garlic, wilted onions, green onions or even chopped frozen broccoli that has been thawed and drained of excess moisture.

There are few products that I recommend, or in this case don’t recommend, and those are conventional potatoes and canned tomatoes.  I don’t like conventional potatoes because they spray them with an anti-sprouting spray which means they have a longer shelf life.  I don’t know if the spray is good for you or not but I want potatoes that aren’t far from the harvest because I want fresh potatoes.  They taste better and I know they do, it’s that simple.  Organic potatoes can’t lollygag around and therfore are generally fresh.

The two types of potato most readily available at most groceries that would work for this dish are Russet Burbanks(Idaho) or Yukon Golds.  Both brown up nicely and both create a creamy interior.

As for tomatoes, I don’t like canned tomatoes because the acid leaches out the chemical from the liner of the can.  I only by tomatoes in glass or those nifty carton type boxes.

Cost to make the potatoes:

Serves 4 as a side dish

white pepper if you have it

1. Smear the bottom of a 10 inch non-stick skillet with soften butter.  Make sure to spread it evenly across the bottom.  Drizzle the oil into the pan too.

4. Lightly season each layer of potato with a pinch of salt.  Once the first layer is down you can layer the rest of the potatoes into the pan without detail to fanning them.

5. Heat the oven to 350˚ F.  Place the pan over medium heat to begin browning the bottom layer.  This always takes longer then I expect. I also have a baking stone that has a permanent spot in my oven so I also know then the pan goes into the oven it will continue to brown the potatoes.

6.  Once the bottom is browned nicely cover the pan and slide it into the oven.  Bake until the potatoes in the middle are tender.  Depending on how many layers you created anywhere from 25 to 35 minutes.

7. Remove the pan from the oven with a oven mitt or towel.  Place a pizza tray or the bottom of a sheet tray across the top of the pan.  In one swift motion invert the pan and tray.  Place the tray into the oven and let the cake bake another 5 to 10 minutes to crisp the top.  Serve.

One thought on “Potato Cake”