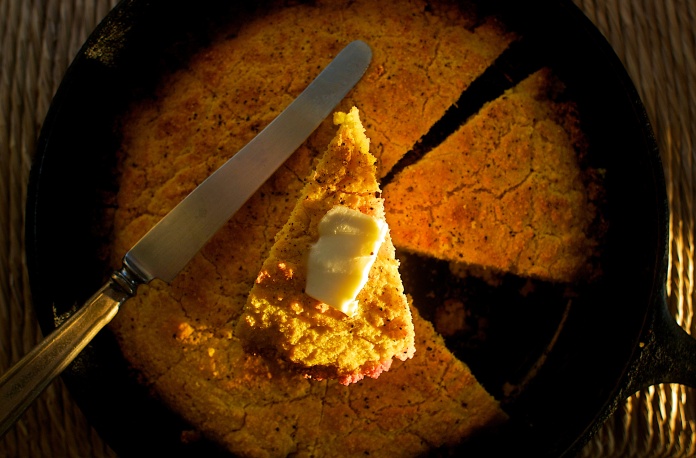 The only thing that might make this cornbread more Southern is using white cornmeal instead of yellow. Most certainly the cornbread debate has set off more feuds than history has recorded. Should it contain sugar or not is usually the big question but why should you have to make a choice. That is not to say this is one of those recipes that is going to combine the best of both worlds because it is not. You shouldn’t mix cornbreads just like you shouldn’t mix liquor. Flat out, it is always a bad idea. You should have two great cornbread recipes, one Northern sweet version and one Southern.

With that in mind you can pretty much bet when the words black skillet come before the word cornbread it is going to be Southern. The title here holds true to that theory. Actually most recipes, such as this one, vary only slightly in ingredients but usually find a fork in the road when they reach the part of the recipe that reads  “technique”.

I use stoneground corn flour because, one, it tastes great and two I like the quality of the crumb in the final product. Some people use cornmeal and let sit overnight in what is called a soaker, meaning the liquid and the meal are mixed and allowed to rest overnight and then you add the soda and baking powder before baking. Kind of defeats the purpose of quick bread which is what cornbread really is. With that in mind, what seems to work well is to let the corn flour soak for twenty minutes while the pan is in the oven heating.

Heating the pan is paramount to getting the full cornbread experience.  Without heating it you will never get the crisp crust that tastes like a cross between deep fried catfish tails and bacon.  What you have never eaten the crispy tails off of deep fat fried catfish?  Why lucky you, you still have some living to do.

To be completely stubborn if you can’t bring yourself to use either  bacon grease or butter you should probably make some other bread because, really, you will be missing the point.  If you sub out the bacon grease for real butter cut down the pan warming time to twelve minutes or the butter will burn.

3. Beat egg and add it to the buttermilk and then add the liquid to the dry ingredients and mix quickly to combine the batter.

4. Place the cast iron pan into the oven and set a time for twenty minutes.

5. Using a dry towel or oven mit remove the pan from the oven and set it on a heat proof surface. Mix the batter with one or two quick spins and gently scrap it into the pan. You may need to use the whisk to pat it down and around so it reaches the edges of the pan. Grind some fresh ground pepper over the top.

6. Place the bread into the oven for 20 minutes or until it just starts to brown. Remove from the oven and cover it with a towel for 5 minutes. Slice and serve with lots of butter.