Some people collect cars, for others it is playing golf, for me, it’s barbecues. I don’t collect them per se but rather I cook with them. Their value isn’t termed by condition but in hours of use. Much like a cast iron skillet I can gauge the worth of a good smoker by the black patina that coats its inside. While many men might spend their weekends under a car, I prefer to smell like hickory rather then gasoline and motor oil. It’s how I get my kicks.

So you can imagine my excitement to I discover I won a Big Green Egg! Yea, I won. I never win anything but Debra Smith at SmithBites pulls my name from a hat of entrants and I win, I never win.  Nevertheless, it is like getting the Most Improved trophy in grade school.  I sort of treat it like that, it sort of looks like that and I couldn’t be any happier then to be a proud owner of one.  Hell, I park it in the garage if that tells you anything. I don’t even put my car in the garage, the garage is for my tractor, and now the grill.

The whole time I am assembling my grill I think about what I am going to cook first.  A steak, a brisket, venison, burgers, pork chops, butt steak, I go through all the possibilities and my head spins in anticipation.  The dogs look on with concern for my well being,  TrixieB even comes over and gives me a lick on the face and some big sad eyes of worry.

As I said, I don’t collect grills.  I have three.  One is a smoker, that is all it does, it smokes meat, charcuterie and hams at low temperatures.  My other grill I hand made.  It is a street food kind of contraption meant to cook fast and furious.  It is for meat on a stick, small stuff that cooks through quickly.  Both serve their purpose.  So maybe I don’t consider my self an aficionado but I do consider myself an expert.  It was my station each day at the restaurant.  I worked the grill day-in and day-out for seven years.  I can cook a steak, a boneless chicken breast and any kind of fish you can imagine but, like professional ball players who sometimes hit a foul ball, I do sometimes miss the mark but rarely, and I mean rarely, do I over cook a steak.

My point being, I am excited to try what many consider to be the Mercedes of grills, the Big Green Egg but I am a little apprehensive having never used one.  Don’t think I wasn’t a little more then cautious too,  I bought a high end Wolfe stove and it’s a piece of crap, so I know just because something has a name doesn’t mean it is going to work but I have to be on my game also.  I am approaching this with a certain err of caution.

But then it hits me.  Friends often accuse me of using appliances differently then anyone else, most recently crock pots were entered as evidence into this court of opinion.  So I asked myself, “why would I grill a steak?”  It took all of a second to answer my own question, “why not sear cauliflower steaks in a pan on the grill?”  That was easy enough, decision made.

Here is why I wanted to cook cauliflower steaks.   The Big Green Egg people claim a lot of things about their grill.  You can cook pizza on it, bread, grill steaks or smoke brisket is what they say.  Which I get, it is sort of like a wood burning oven.  It is ceramic, it holds heat, and it gets very, very hot but can also hold a low temperature for a long time.  It holds a lot of promise.  So my thinking is, I want to put a cast iron pan on the heat, see how hot it gets and how well it sears.  I know, I know, you can cook with a cast iron skillet on your stove.  True, but my stove won’t impart a smokey flavor to whatever I am cooking.  And that is it,  that is what I want to find out, is what is the smoke flavor of the Big Green Egg going to be like.  It is the one character trait I am most interested in.  Will it be bitter and heavy or will it be just right.  When it comes to vegetables the right amount of smoke goes a long way.  To much and you have a very bitter ash tray kind of experience that will keep you from tasting any other part of your meal.  And seriously,  antacids are no kind of dessert.

I am not going to bore you with blow by blow cooking details other then to say the grill is great.  It lights fast, it gets very hot quickly and it imparts a great flavor to whatever you are cooking.  My cast iron casserole heated quickly, I actually thought it might get to hot and burn the cauliflower before it became tender on the inside, but it didn’t.  It cooked the cauliflower with a perfectly light kiss of smokey flavor.  Since then I have roasted chickens to great applause from the family, from me too.  A tri-tip roast delicious, pork chops amazing, cauliflower steaks a home run, and the Big Green Egg, a real winner. 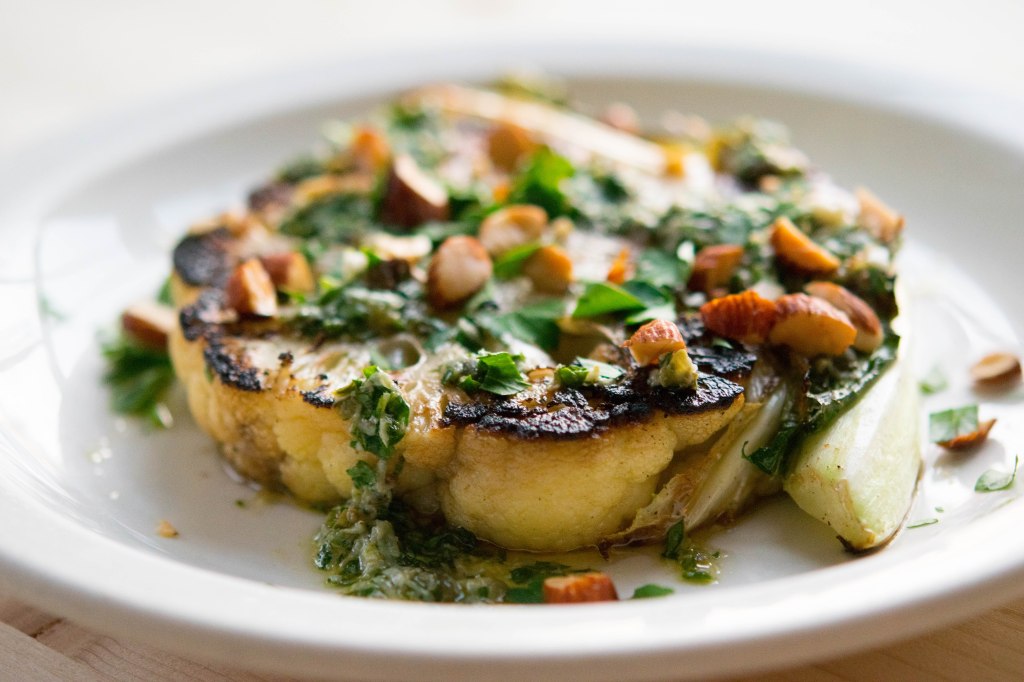 half a cup of salted almonds, chopped

1. Build a charcoal fire for direct heat grilling in your grill.  You want it to be very hot.  Place a large cast iron skillet right in the middle of  the grilling rack.  Cover the grill.  What happens when you cover the grill is the heat builds, the pan becomes very hot and the lid keeps a little bit of smoke flavor circulating.

2. While the grill is heating make the salsa verde.  In the bowl of a mortar and pestle combine the lemon juice, garlic, anchovy, and parsley.  Beat it up with the pestle.  Add a two finger pinch of salt, a dash of black pepper and a few glugs worth of olive oil.  Stir to combine, taste and add more oil it the salsa is to tart.  Stir in the cheese.

4. Drizzle the steaks with olive oil and season them with salt.  Take them out to the grill.  If you have a thermometer on your grill it should read about 600˚ F.   Nevertheless when you open the lid the cast iron pan should be beginning to smoke and when you place the cauliflower into the pan it should sizzle.  Cook each side until of the steak until it is very deeply caramelized.  Remove the steaks from the pan.

5. Drizzle the steaks with the salsa verde, top with almonds, minced parsley and serve.