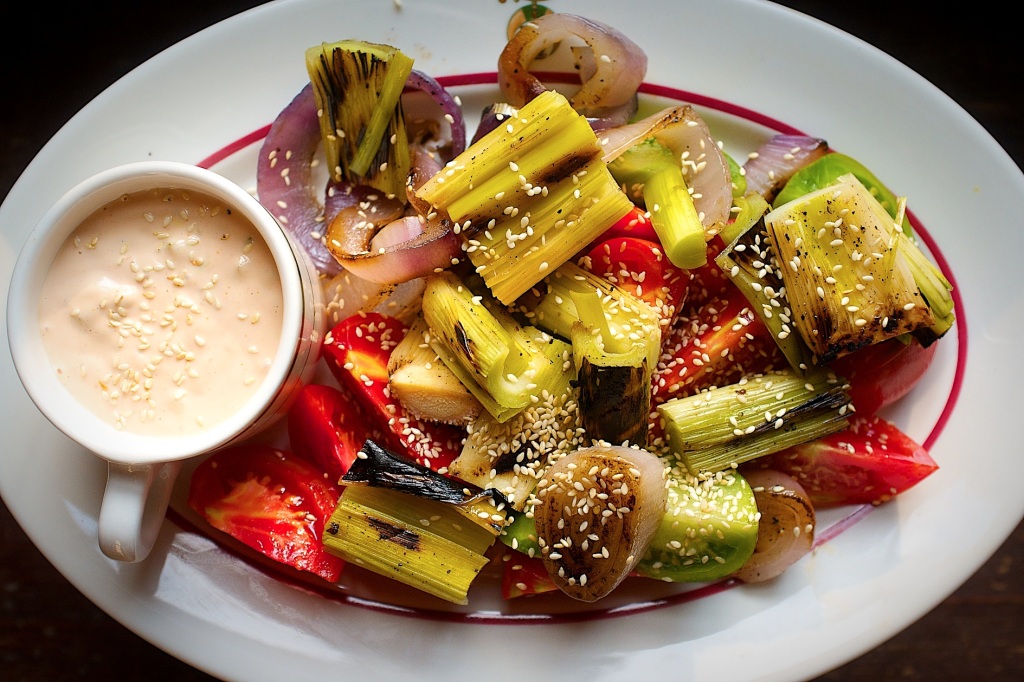 Sadly, as I sit at the bus stop watching my daughters play, I have to tell myself: summer is so last season.

All summer I have been grilling vegetables for salads. Mostly zucchini and summer squash; I char it deeply and then chop it and toss it with basil, lemon juice, and olive oil, in sort of a grilled chopped salad. It captures all the flavors of early summer one could want. But at some point, either the zucchini or I tire and the dish no longer appears on the table. At least not until next summer, when the annual craving for these flavors peaks again.

Often the salad that comes next in my world is grilled Belgian endive, romaine, and radicchio, but somehow I am not ready for the bitterness of chicories yet. Maybe it’s the September heat wave in which Indiana finds itself.

The car windows are down but it’s no relief because there isn’t a breeze to be found. There was a little bit of rain last night which has done nothing but make the road steam. The girls run around in the mist giggling, becoming legless fairies flittering back and forth in a game of tag. Suddenly a yellow dragon with flashing red eyes rises out of the mist and collects them up and whisks them off to school.

I have lots of things I need to do but won’t.

Instead of turning around toward home I drive the opposite direction from the bus stop and head down the road to the Indiana Academy, a Seventh Day Adventist school that runs a farm — a big one, that raises cattle the way my grandfather raised cattle.

A year or two ago one of the teachers started a produce stand and now the school grows a huge plot of organic vegetables. At any one time you’ll see many of the students working the fields: weeding, planting, harvesting. I like to support the school, so I use the stand to supplement the things I grow. I let them grow vegetables I don’t want to. I go there to talk to interesting people. I go there for inspiration.

This morning they had a big basket of gorgeous leeks. 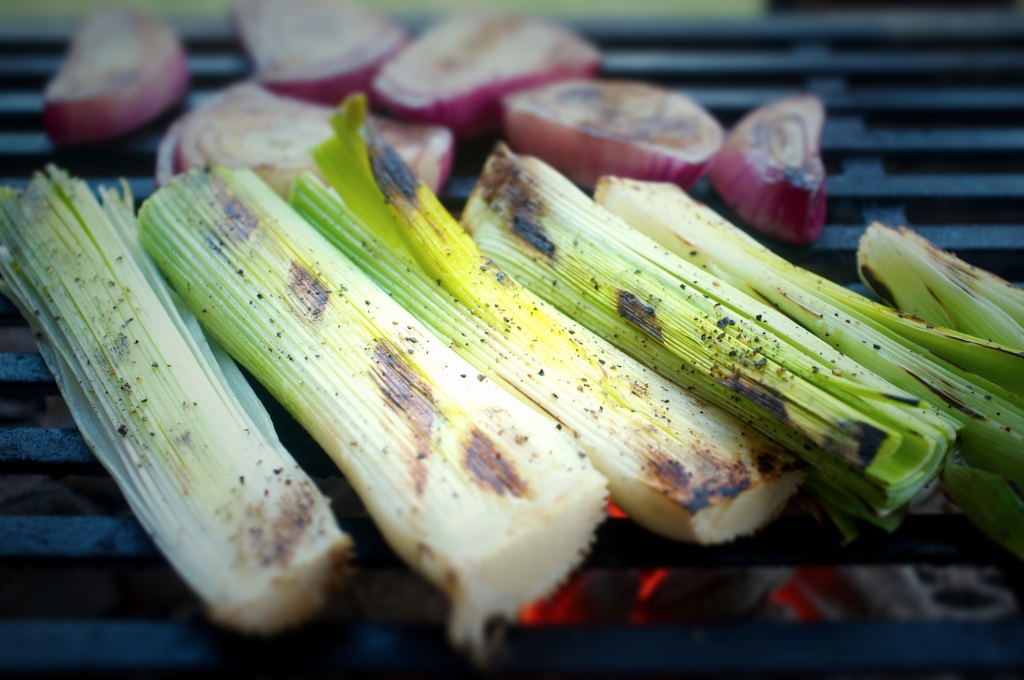 5 Tips for Grilling Vegetables for Salad

1. While I don’t like to oil my grill grate, (I think of it much like a seasoned cast iron pan), in the case of vegetables you need to toss them with some sort of fat before grilling, be it melted butter, olive oil, or some other oil. It isn’t so much to keep them from sticking as it is to keep them from developing a dry and tough exterior that makes for poor eating.

2. Some vegetables need blanching before grilling. Potatoes, sweet potatoes, and celery root are a few of these.

3. In the case of lettuces and leafy greens like kale, you don’t want to grill them to deeply or they’ll become bitter. With most greens and salads, think of it as wilting with spots of light caramelization more than grilling.

4. I often grill vegetables, as I did in this recipe, and then wrap them tightly in foil. I then set them to the side of the grill in a very low heat area and let them soften.

5. Just as you would a great steak, season the vegetables with salt and pepper before you grill them.

For the Thousand Island Dressing

2 thoughts on “Everything but the Hamburger, Special Sauce Included”